Why Aren’t More of My Followers Seeing My Facebook Posts?

Social media was supposed to be the secret formula for success for small businesses trying to reach local audiences.  Social-Local-Mobile (SO-LO-MO) was the phrase that hit all of the buzz points.  So why is it that so many small, local businesses on Facebook are having a hard time reaching their audience?  Why is it that when you finally create a Facebook business page, it doesn’t seem to drive any business to your bottom line?

As is true with most things in life – there is no easy answer to this.  However, there is one fact that is the new elephant in the room in the social media world:  Facebook needs to make money.  Translation:  You need to pay in order to have people see the news you are sharing on Facebook.

Look.  We know.  Nobody is happy about this.  Facebook started out as this free platform.  Posts would go “viral” on it.   There was a ton of hoopla.  We hear from people all of the time about what they expect from creating Facebook accounts:

You are right – on all accounts.  Facebook is free.  It will always be free….for regular users…to receive the basic service that Facebook decides it will dole out.

However, Facebook also works on the premise of supply and demand in terms of what is considered “advertising”.  Anything a business posts, Facebook considers advertising.  Which is why they are going to make you (and every other business) pay for that advertising to reach their valuable users.  In fact, Facebook has also started limiting the number of people that personal posts reach and encouraging all Facebook users to “promote” posts that they want everyone to read (i.e. Did your daughter just win the state spelling bee?  Pay $5 and Facebook will let all of your friends know).

My Business has 800 Facebook Followers, Don’t They All See My Posts?

No.  They do not.  While in the past Facebook showed posts to a wide swath of followers, that access has diminished over time.  If you log into your Facebook account now you can see exactly how many of your followers have seen any post that you have shown.   At the bottom of every post on your Facebook Business Page, Facebook shows you a tally of “how many people have seen this post”.  If you simply posted something, and did not pay Facebook any money to promote it, that is the number of people who Facebook showed the post to.  You will see it is a VASTLY smaller number than the amount of followers that you have.

While many people believe that all of their followers will be shown their Facebook posts, that is not the truth.  Over the past few years, Facebook has developed an algorithm that shares content with the people Facebook believes wants to see it (it is likely that the number of people who saw your post frequently interact with your page and are already your biggest fans.  Unfortunately, this is not necessarily the people you are trying to reach on Facebook to grow your audience bigger).  Here’s the kicker, if you share information on Facebook that nobody interacts with, Facebook determines that your posts have little value and will start sharing them will fewer and fewer people.

Is there any good news about this Facebook algorithm?

Yes.  The good news is that if you are one of the people active on Facebook who posts high quality information (information that your followers interact with) and who takes the time to make posts enticing to their audience – viral social media sharing of your information can still happen for free.  The more people who like your post, the more people Facebook will share it with – without you paying for it (also called “organic sharing”).

Test it out.  Look at a post on your page that in retrospect, likely meant little to your followers.  Now post something that you create with the goal of “getting people to share it”.  Something exciting.  Something interesting.  There are ways to promote your business at the same time that you are sharing something that other people will want to pass on.  How?

…Because you have built up a fan base of followers, even with viral content you cannot reach them all.  Let’s say, for example you have an upcoming sale.  The people you want to reach the most, are established fans.  People who are loyal customers, and who are going to come to your store to shop and take advantage of the sale (and maybe buy a few non-sale items while they are there).

The number of people who have “seen this post” are the concentric rings of contact that happens on social media.  So let’s say:

3.  This means the people who have “seen this post” are also Bill’s followers – not just your followers.

If those fans are not in the market for what you are selling, or live too far away, or already have a favorite supplier of whatever widget you are selling, then they are not the audience that you wanted to reach.  However, they are the audience that Facebook presented your post to.  If, instead you choose to pay to “promote” your post, you can, indeed reach all of your loyal Facebook followers with news of your sale. 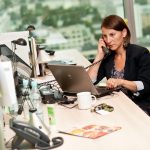 Why College Students Should Use LinkedInSocial Media
I thought Facebook Was Free: Hints for Spending Money Wisely on Social MediaSocial Media